This past weekend I waged battle against half of Washington DC and emerged triumphant. I secured ever elusive tickets to Infinite Kusama Exhibition at the Hirschhorn.

To be fair, I did not sit in line starting at 5:30AM like other dogged souls. Instead, I went the corporate route. After waiting for 30 minutes to sign up for a Hirshhorn membership, I secured two of the literally gold-colored tickets. To the people who waited in the cold line and shipping container turned coffee shop, I salute you.

But, fear not angry line people, I did not escape the oppression of the queue. No, upon entering the exhibition, still reeling from the high of even being admitted, my family and I confronted another line. And then another one, and then another one.

Infinite Kusama surveys Yayoi Kusama’s storied career in installation and abstract art. The Japanese avant garde artist has for years created immersive art experiences around the world. The exhibition at the Hirshhorn leads viewers through Kusama’s great hits. These works range from massive patterned canvases to immersive rooms filled with mirrors, lights, and polka-dotted pumpkins. In other words, it is Instagram fodder at its finest. 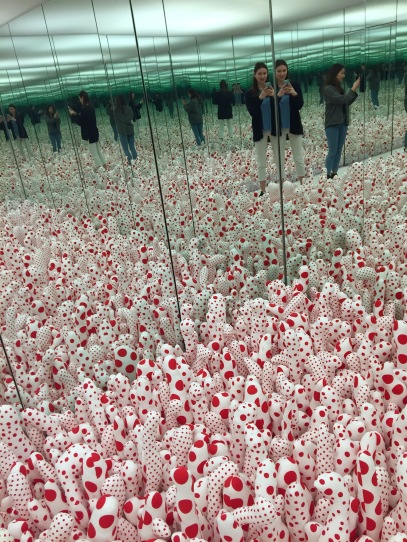 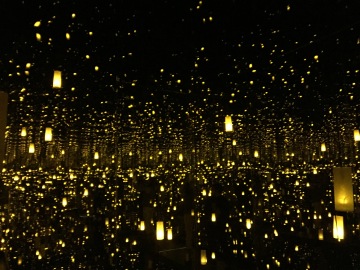 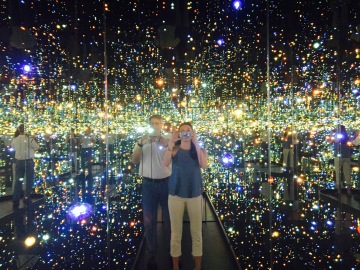 The Infinity Mirror Rooms inside the exhibition generate lines that rival the one outside the museum. Kusama designed the rooms to play with visitor’s notion of space, time, and existence. You get 20 second to experience each one. Naturally, the act of reflecting on one’s relationship with the universe can’t easily be accomplised in the span of 20 seconds. Especially not if one is also invested in capturing the experience for social media consumption.

Since childhood, Kusama has experienced hallucinations and nervous disorders. In 1977, she voluntary moved into a mental hospital where she lives to this day. This background inspires much of her artwork. For example, her trademark polka-dot motif stems from hallucinations she experienced as a child. In a way its fitting that visitors might feel anxious, uncomfortable, and awed in rapid secession. Meditation in the infinity mirror rooms may be designed to feel like a fleeting hallucination, rather than a leisurely repose. 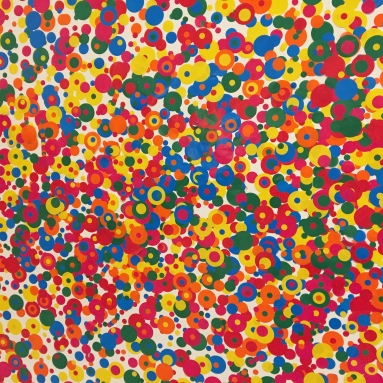 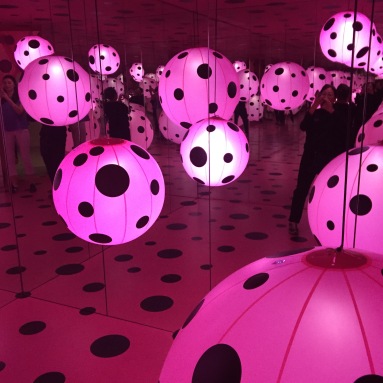 And for all the selfie haters, it’s worth noting that Kusama first burst on the art scene putting her body on display. She often posed nude as part of her photographs or installation sets. An artist who pioneered putting herself in her art would hardly turn up her nose at a steady stream of visitors doing the same. It’s part of a theme Kusama herself explores.

Within some of the Infinite Mirror push back is a common theme. That timeless notion that widespread popularity or interest in art somehow degrades the art. While, there is a unmatched sense of bliss in wandering a marble museum alone, the masses are not the enemy. Parisians used to mob the famous Salons, jostling each other to oogle and mock the latest masterpieces. Pilgrims came in droves to see the altars and stained glass of Western Cathedrals, believing the beauty brought them closer to God. If a bunch of millennials line up outside a Smithsonian Museum eager to capture of photograph of the sensational spectacle inside — well, some might label it the decline of art, but I see it as its rightful return to the heart of the popular zeitgeist.